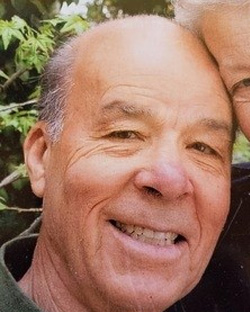 December 6, 1931 – October 5, 2021 Roger Lynn Rusler passed peacefully at Claremont Place on October 5, 2021, he was 89. After living with dementia for several years, he contracted COVID-19 and finally succumbed to complications from pneumonia. Roger was born in Benedict, Nebraska on December 6, 1931, the son of Garland and Della (Armstrong) Rusler. He grew up in York, Nebraska and moved with his family to La Crescenta, California in 1946 where he found work at a local bakery, developing skills he would enjoy throughout his life. He graduated from Glendale High School in 1949 and married Marjorie Ann Crater in 1952. Roger and Marjorie lived in Memphis, Tennessee and Norfolk, Virginia, in the early years while Roger was in the Navy where he received training in electronics. He achieved the rank of Aviation Electronics Technician First Class. In 1956 Roger accepted an offer for work from General Dynamics, and he and Marjorie moved their young family to Pomona, where they lived in the Westmont neighborhood until 1971 when they moved to the Lincoln Park neighborhood. With 8 children in Pomona public schools, Roger and Marjorie were active in the PTA. They also enjoyed opening their home to their children’s many friends and a string of foreign exchange students. They were active in the local chapter of AFS and several other exchange programs, hosting students from Kenya, Germany and Japan among others. After a 24-year career, Roger retired from General Dynamics and became a partner in the May and Midkiff Construction Company. In later years, summers were spent taking road trips, visiting far flung family and making it a point to attend every high school and college graduation of their many grandchildren. Roger and Marge also enjoyed visiting their many friends overseas. Roger was active with the Lions Club and Pomona Heritage. He could often be found leading seminars in woodworking and historic renovation techniques as well as working on historic structures such as the Ebell Club, the YMCA and many homes in the Lincoln Park neighborhood, or just walking one of his many Boxer dogs, another lifelong passion. When Marjorie fell ill in 2008, Roger took on full responsibility for her care, an office he devotedly performed until her passing in 2012. They were married 59 years. After Marjorie’s passing Roger continued to work on homes in the neighborhood but over several years increasingly suffered from dementia. He spent the last 2 years in the care of the wonderful staff in the Memory Care wing of Claremont Place in Claremont, California. Roger is survived by his children Gregg Rusler of Wentworth, MO, Linda Seufert of Wentworth, MO, Mark Rusler of Los Lunas, NM, Carol Brown of Denver, CO, Diane French of Pomona, CA, Eric Rusler of Menifee, CA, Morgan Rusler of Atwater Village, CA, and Brian Rusler of Tokyo, Japan, by 18 loved grandchildren and 10 great-grandchildren, and by his sisters Sharon Smith and Donna Witte. He was preceded in death by his brothers Robert, Forrest, and Dennis.