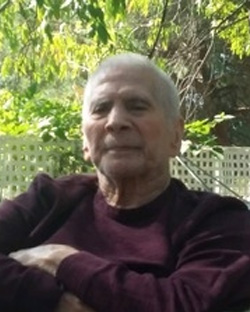 Roland Espinoza, a lifelong Redlands resident, passed away on February 4, 2020 in Redlands surrounded by his loving family at the age of 97. Roland was born January 24, 1923 in Redlands, California to Rafaela and Raymond Espinoza. After graduating Redlands High School in 1941, he joined the military – proudly serving in the 1537th Army Air Fforce base unit from 1943 – 1946, spending 19 months in the Asiatic and Pacific areas during WWII.

In 1949 he married the love of his life, Mary Espinoza and they had seven children together. Roland was an aircraft mechanic with the 63rd Field Maintenance Sq. Aero Repair Shop for Norton Air Force Base for 35 years and was awarded with a certificate of service and a 20 year pin during his employment. In retirement he enjoyed being a member of the American Legion (over 50 year member) Post 650. He absolutely loved sports but his favorite was baseball and he was a participant in the Mexican American Baseball League of the Inland Empire. It was well known that he was the ultimate Dodger fan, which he passed down to all of his family. More than anything, he loved his family.

He was predeceased by his daughter Charlotte; his parents; his siblings: Raymond, Alfred, David and Edward; and his wife Mary in 2015 whom he missed dearly. He is survived by his children: Mary Rojas (Tony), Roland Espinoza (Debbie), Yvonne Camarena, Carol Espinoza Viveros, Alan Espinoza and Anna Marie Proctor (Michael); 13 grandchildren; 27 great grandchildren and 5 great great grandchildren.