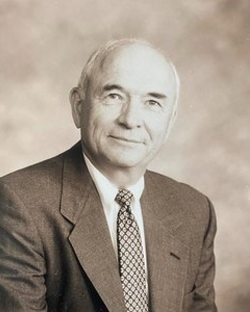 January 4, 1938 – June 21, 2022 Ronald Evans 84, of Carlsbad, California passed away on the morning of June 21, 2022. Holding his hands were his wife of 58 years Rosemarie and son Mark. He is also survived by his daughter Dayna Schmitt, sister Arleta Bernson, brother Allen Evans, daughter-in-law Christine, son-in-law Stephen Schmitt, granddaughters Emily and Elise, a 5 pound rotund dog named Gigi, and several nieces and nephews. Ron was born in Alpena Michigan to Elmer and Dorothy Evans on January 4, 1938. He served in the Naval Reserves, graduated Michigan Tech with a B.S. in Mechanical Engineering then jumped in a Corvette with best friend Lowell Werth and drove until they ran out of money in Southern California. He began working for the California Portland Cement Company in 1961. He was President and CEO from 1990 until his retirement in 2002. He was known for his integrity, leadership, wisdom, compassion, and thoughtfulness. He was a dedicated husband, a patient father, and always prioritized his family’s happiness and stability. To list all of his achievements would contradict his humble nature. However, he lived a life of adventure, discovery and service to others so profiling that life by the decades seems appropriate. He volunteered for the San Bernardino County Search and Rescue team in his 30’s, coached soccer, broke horses, raised and rounded up cattle (and two children) in his 40’s, earned his pilot’s license for fixed-wing aircraft and helicopters in his 50’s, enjoyed sailing and surfing in his 60’s, delighted in being a grandpa in his 70’s and enjoyed being with friends and NOT traveling in his 80’s. He was generous with his time and money and didn’t waste either. He lived purposefully, was respected and beloved. He will be missed beyond measure. A service will be held at 10 am on July 11th at St. Michael’s by-the-Sea Episcopal Church, 2775 Carlsbad Blvd., Carlsbad followed by a private burial. A reception for all will be held at 12:30 pm at The Crossings at Carlsbad, 5800 The Crossings Dr., Carlsbad. Instead of flowers, please consider donating to the Parkinson’s Disease Foundation.