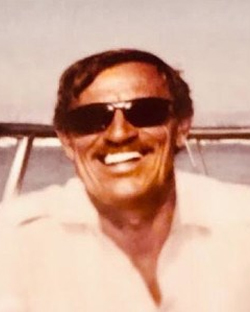 1929 – 2022 Rudy passed away in Upland, California on August 6, 2022, at the age of 93. He was born in Milwaukee, Wisconsin. As a child, he and his parents moved to Salt Lake City, Utah, where he grew up. He moved to Pomona, California, his senior year and graduated from Pomona High School, class of 1947. Rudy served in the Army during the Korean War, serving on the front lines for 18 months. He left the Army as a Master Sergeant. He obtained his California Architectural License in 1960. He was the last of the original partners who founded HMC Architects in Ontario. Rudy had many hospital and school projects and was the architect for over 30 Ontario-Montclair School District schools. Rudy was a member of the Southern California Chapter AIA. Later he was a charter member and past president of the Inland California Chapter, AIA. He was a long-time member and past president of Ontario Rotary. Later he became a member of the Rancho Cucamonga Rotary Club. Rudy was always active and had many interests. Over his lifetime he was a skier, a cowboy, a tennis player and golfer. He had a pilot’s license. He was a sailor and loved spending time sailing his boat, the Delta Dawn. Rudy was kind, generous, intelligent, honorable and stubborn. He was admired by many, loved by many (and disliked by many contractors, subcontractors and engineers who he tried to keep honest.) He will be greatly missed by family and friends. He is survived by his wife of 38 years, Linda, three children – Kathy Hedlund (Gary), Terry Meeks (John) and Richard Turner – two grandchildren, two great-grandchildren and many other loved relatives. A private ceremony will be held at a later date.