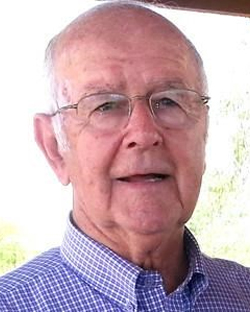 Russell (Russ) Gattermeyer Russell (Russ) Gattermeyer, was born on January 12, 1932 in Hamilton, Ohio and passed away on August 22, 2022 at the age of 90 at his home in Menifee, CA with his family by his side. He is survived by his daughters Joan Coppenrath, Amy Alvarez, Lori (Rob) Enfield; grandchildren Jennifer (Matthew) Smith, Andrea (Tim) Moffatt, Christina and Catherine Coppenrath, and Gregory Gattermeyer; great granddaughters Annabelle and Ellyse Moffatt; and brother Gene Gattermeyer. He was preceded in death by his mother Helen and father Leonard; wife Shirley; son Gary Gattermeyer; siblings Evelyn, Florence, Marcella, Robert, Laverne, Janet, Virginia, Shirley, and Dick Gattermeyer; and son-in-law Alfredo Alvarez. Russ grew up in Hamilton, Ohio, attended St. Ann School graduated from Hamilton Catholic High School. He was stationed at March Air Force Base during the Korean War serving in the U.S. Army. After the war he and Shirley elected to stay in California to raise their family. While attending college Russ worked as an electrical and mechanical engineer at Motorola and Philco-Ford in Riverside, CA and Ford Aerospace in Newport Beach, CA before retiring in 1985. He was a very social person and enjoyed spending time with his family and friends. He loved music and played the clarinet in the high school band and guitar with his buddies for beers at the local pub when he was a teenager. He knew the words to so many fun songs. His entire life he was a loyal Notre Dame football fan, even stopping at the stadium during a cross country vacation with his young family. He had a wonderful, quick sense of humor and kept his family laughing. Russ loved his tools and designed and built his homes at Lake Matthews, CA and Tahoe Donner, CA. At his Palmilla community in Menifee, CA, he was an avid golfer and served as the President of the homeowner’s association for more than 26 years. To acknowledge his service, the community named the local club house after him. His signature shirt was red plaid and he was never without a pen in his shirt pocket.