Written by Night For Vets on August 3, 2020. Posted in Gone But Not Forgotten 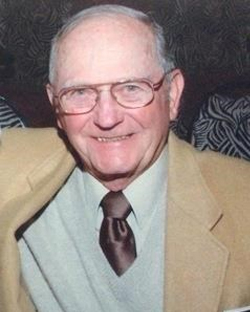 Russell Richardson died peacefully on July 22, 2020 at the age of 95. He was born on April 14, 1925 to William and Bessie Richardson in Muskegon, Michigan; the second born of their five children. After graduating high school in 1943, he enlisted in the United States Army Air Force. His fascination and love of airplanes led him to complete Gunnery, Bombardier and Navigation schools. He proudly served his country until his honorable discharge as Second Lieutenant in 1945 at the end of World War II. He then served in the United States Air Force Reserve until his honorable discharge as First Lieutenant in 1955. He began his career path by working as a surveyor for the Army Corps of Engineers and worked his way up to become a registered civil engineer. While vacationing in Cuba, he met Dorothy Yeandle and they married in 1952. His various jobs took them to Chicago, Washington D.C. and Battle Creek Michigan. In 1960 he accepted a position with the city of Pasadena and he and Dorothy settled in nearby Arcadia, CA where they raised their son Paul and lived for 30 years. Upon his retirement from Pasadena, Russell and Dorothy moved to Redlands, CA to be closer to their son and family. During this time they continued their shared love of travel, visiting more than 200 countries in their years together. He was an avid photographer who enjoyed chronicling and sharing their travel adventures with family and friends. Russell was a devoted husband, father and grandfather who loved camping trips in their motorhome, fishing expeditions and football games with his son and sharing in his granddaughter’s activities throughout the years. In the later years of his life, despite his struggle with dementia, Russell remained a patient, kind and cheerful man up until the very end, endearing himself to all who knew him. His family would like to thank the staff at Mission Commons in Redlands for their loving care of Russell these past 16 months. Russell was preceded in death by his parents, William and Bessie Richardson, his sisters Elaine Richardson and Jean Van Hall, his brother William Richardson and his wife of 68 years, Dorothy Richardson. He is survived by his sister Jane Richardson of Fruitport, MI, son Paul (Connie) Richardson of Redlands, grandaughter Laura (Zachary) Raney of Cincinnati, OH, 3 nieces and 6 nephews.