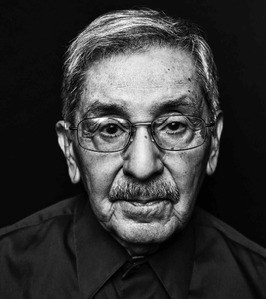 02/17/1925 – 11/10/2022 Salvador C. Ayala, who served his country in WWII and his community in peacetime, passed away peacefully at home Thursday morning just three months shy of his 98th birthday. His deployment with the U.S. Navy emboldened him enough to challenge the status quo in his segregated hometown, a crusade sparked by the inequities he had experienced as a boy born and raised in South Colton. Like many of his peers, he left Colton High early thinking he could help his parents and secure his own future in the process. Sal’s first tour of duty lasted from July 12, 1942, through December 13, 1945, when he was Honorably Discharged with a GMG-3 rating. He crossed the equator for the first time as a nineteen-year-old aboard the USS Epping Forest LSD-4 which earned eight battle stars for amphibious landing invasions, among them the historic recapture of Guam and the Battle of Leyte Gulf, by some criteria the largest naval battle in history. Remarkably, the ship also survived a 90-day Kamikaze assault during the Okinawan Campaign, the largest amphibious assault in the Pacific. The heroic effort of men he landed on hostile beaches left him with the highest regard for the United States Marine Corp. Between March 27, 1946 and July 22, 1948, when he was again honorably discharged, the USS Chilton APA-38 carried him to duty in the Bikini Atoll, China, and Japan. Over the ensuing years, Salvador earned his GED at San Bernardino Valley College and attended Nursing School at L.A. County Hospital where he worked as an orderly in the communicable disease ward. Later he held a position at Patton State Hospital, a forensic psychiatric facility in San Bernardino. He also lobbied successfully for facilities improvements in his Maple Street neighborhood and government funding for programs at Colton High. In 1946, he organized the effort to revive American Legion Post 155 which had gone dormant, and in 1953, Salvador helped break the color line at his local North Colton U.S. Post Office branch where he had previously been denied an application. He retired proudly in 1986 after 33 years at that very branch. As Sal often acknowledged, most of these experiences unfolded with Frances Muro Ayala at his side, figuratively if not literally. They married in 1950 at San Salvador Catholic Church which he helped build, raised daughters Mary Frances Ayala-Trevino and Anna Marie Ayala-Trevino (married to brothers Richard and Andrew), and they participated in church and community affairs for 67 years. In fact, he and Frances were founding members of Immaculate Concepcion Catholic Church. Notably, Sal also held life-time memberships in the American Legion and in the Knights of Columbus as a Fourth Degree Honor Guard. Salvador was preceded in death by his parents Micaela and Ascension, his wife, nine siblings – Cristobal, Louis, Matilde, Josefina, Frances, David, Daniel, and two brothers named Antonio who passed as infants in ’30 and ’37. He leaves behind his daughters and sons-in-law, seven grandchildren – Michael, Marisa Miranda (Jesus), Vanessa, Andrew, Daniel (Gisel), Olivia, and Victor; great grandchildren – Arlana Gieslle Miranda and Jesus Javier Miranda; numerous Ayala, Muro, Robles, and Cardenas family members, and many other Coltonites whose friendships he cherished.