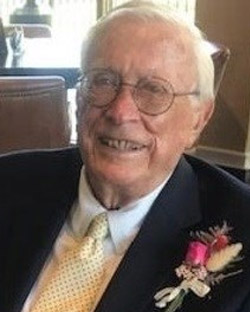 Dr. Sam Knappenberger, age 92, passed away September 26, 2021, in his Redlands, California home from natural causes. Sam was born to Dr. and Mrs. M.T. Knappenberger on June 8, 1929 in Warren, Ohio. He had one older brother, Tom. In his youth Sam attended Staunton Military Academy and Mercersburg Academy. After graduating, he attended Wittenberg University, where he received a Bachelor of Science degree, and met his future wife, Margaret Rhodes. Sam followed his education at Wittenberg with a year of graduate school at Ohio State University before beginning medical school at New York Medical School, where he acquired his M.D. During his time in medical school he interned at the Henry Ford Hospital in Detroit, Michigan. He completed his residency at Columbia-Presbyterian Medical Center in New York City. After completing his residency, Sam spent two years in the United States Navy stationed in Bethesda, Maryland. During his time in the Navy, he spent one year in Africa working at Albert Schweitzer’s hospital in Gabon, and visiting 40 countries in Africa. Sam and Margaret married in 1953, shortly after graduating from their alma mater Wittenberg University, and remained happily married for 64 years until Margaret’s passing in 2018. After Sam’s stint in the Navy, he and Margaret, along with their three children — Tracey, Mark and Jane – moved to Redlands, California, which became the family’s permanent home. Sam practiced urology at St. Bernardine Medical Center in San Bernardino for 30 years, eventually holding the title of Chairman of the Board of Directors. During his time practicing medicine, Sam was an advocate for his patients and had many significant professional accomplishments, including being on a team that executed the first kidney transplant in the Inland Empire. Throughout his life, Sam was an avid golfer, shooting his age 150+ times and competing in the Bob Hope Classic 16 times. He was a member at Redlands Country Club, as well as La Quinta Country Club, where he was president for a period. In addition to golf, Sam and Margaret enjoyed world travel after his retirement, traveling to over 100 countries together. Sam is survived by his two daughters, Tracey Fisher and Jane Goodwin, his two grandchildren, Sam and Mary, and his great granddaughter, Rylee.