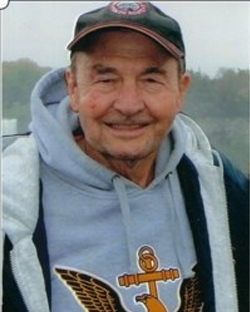 August 29, 1933 – August 15, 2021 Sam Neil McCarson passed away peacefully at home with his family on the day of the Feast of Our Lady of the Assumption, Sunday August 15, 2021. He was surrounded by his wife of 63 years, Patricia Ann McCarson and family members. Sam was born on August 29, 1933. His roots are in the farming community of Littlefield, Texas. He headed west with his parents, Sam and Mildred McCarson and his beloved younger sister Peggy where they settled in Claremont. Sam enjoyed his many friends in Claremont and graduated from Claremont High School where he earned a scholarship to the Coast Guard Academy and was eventually inducted into the Claremont High School Football Hall of Fame. Sam served two years of active duty with the United States Army as a Morse Interceptor in Korea where he earned the National Defense Service Medal and the Good Conduct Medal. Sam’s duties included caring for the local orphan children and building homes for Korean people near his camp. Sam and Patricia have a love story spanning more than 6 decades. They were blessed with five children, fourteen grandchildren, and twelve great grandchildren along with children and family members who became a part of their ever growing family through the years. Sam’s family was the pride and joy of his life. Sam was a long term member of Saint Joseph’s Catholic Church in Upland where he consistently volunteered and became well known for calling Bingo. His career spanned over 40 years with Kaiser Steel and later California Steel. During retirement Sam worked as a bus driver for the elderly. Sam was always serving his family, church and community.