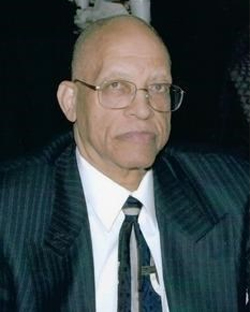 Mr. Saul E. Miller, Sr. was born December 15, 1930, in Memphis, TN to the late Reverend Levi and Mrs. Rutha Mae Miller. Saul was married to the late Carrie Dell Miller for over 51 years until her passing in 2007. He served in the U.S Air Force, retiring as a CMSgt, E-9. In his post-military career, Saul Miller worked at Riverside Community Hospital as the IT Director for 25 years. Saul was talented enough to play and record with Jazz and Blues notables Phineas Newborn Jr. and BB King. Saul’s innovative teaching style with his children produced excellent results. One son played for the prestigious Airmen of Note, the band for the U.S. President. Two children are Basketball Hall of Famers. One daughter played professional volleyball. One son played in the Major Leagues with the Angels. Saul is survived by his five children and ten loving grandchildren. Visitation is on Oct. 5th from 5 pm 8 pm at Acheson & Graham Mortuary. Funeral Services are on Oct. 6th at 10 am at Park Ave Missionary Baptist Church, 1910 Martin Luther King Blvd., Riverside, CA 92517.