Written by Night For Vets on May 30, 2019. Posted in Gone But Not Forgotten 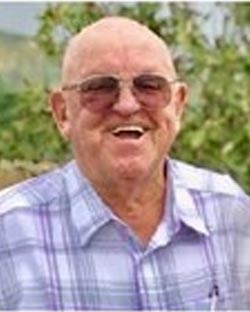 Stanley Carroll Bass, 86, a long time Banning, CA resident, was born October 6, 1932 in Laurel, NE and entered into Eternal rest May 23, 2019 while at Desert Regional Hospital in Palm Springs. He departed peacefully surrounded by family. Stanley was the third son of George Raymond Bass and Mae Margaret Papenhausen Bass.

His early years of growing up were spent in Nebraska, South Dakota and mostly lowa, all on a farm. After graduation from Scranton High School in Scranton, lowa, he enlisted in the United States Armyserving from 1951 to 1953 during the Korean Warand mostly in Alaska before it became a state. After receiving an honorable discharge he learned the automotive mechanic trade spending 25 years in that field. He started working for the State of California in 1977, first at the Banning Scales and then transferring to the California State Consumer Affairs – Bureau of Automotive Repair where he worked a total of 17 years until his retirement in April 1994.

After his discharge from the Army he met his wife, Mary Jane Stroud, and they were married June 19, 1955. They were the parents of two children, Rita Mae Goss and Ricky Lee Bass. He moved his family from lowa to Banning, California in June 1960 where he was currently residing until his death.
Stanley had been an active member of Grace Lutheran Church, Banning, and Christ Lutheran Church, Desert Hot Springs, where he had lovingly served his Lord in many capacities.

During the course of his life, he was a charter member of the Banning Jaycees, worked on the Banning Stagecoach Days Parade numerous times, assisted with youth football in Banning and Beaumont, volunteered for the San Gorgonio Memorial Hospital Auxiliary, active in the Pass Habitat for Humanity and served with the Banning Volunteer Police Department. He loved to travel in their motor home and was active in the CHP 10-10 Travel Club. Over the course of their travels they visited all 50 states as well as some other countries.

He will be fondly remembered for his love and caring attitude and willingness to help everyone and the great smile he always had.