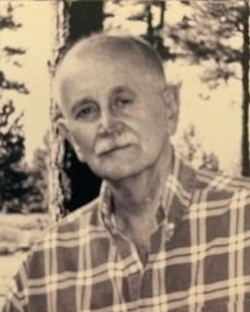 Rancho Mirage – Steve Scott of Rancho Mirage died on March 25, 2020 at age 90. He was a remarkably interesting man and loved visiting with friends and keeping in touch.

Steve was born October 22, 1929 to a large Mormon family in Vernal, Utah. He was the youngest of 13 children. His brothers and sisters and longtime companion, Norman Eckelberger, predeceased him.

Steve went to high school in Utah, moved to Los Angeles, and then joined the Navy in San Diego. He completed his service and was invited to study fashion art in New York City at Parson’s Art Institute.

He returned to Los Angeles and finished his education at Chouinard’s Art Institute. He worked for a while as a clothing designer. He designed women’s bathing suits for Coles of California. He freelanced for a while, designing menswear for Bullock’s, an upscale store in Los Angeles. He also dabbled in real estate, brokered his own office for Century 21 employing 28 agents, built and designed two homes overlooking Elysian Park in Los Angeles, and in his spare time decided to try his hand at writing.

A friend suggested he take the short stories he had been writing and turn them into a novel. The result was “Echo Park”, a thriller, which became an LA Times best seller. Since then, Steve published three more books: “Café Respect” “Glad Hand Saloon”, and “Mrs. Buena’s Pet Cemetery” all murder mysteries set in Palm Springs. His short stories have been published in an anthology in “Dark Moon Digest” as well as many other magazines.

He admired and collected Western art and enjoyed a successful writing career. His unique and catchy style was enjoyed by many. He lived a long and productive life and is survived by his many friends in and around Southern California who will miss his wonderful and caring personality.