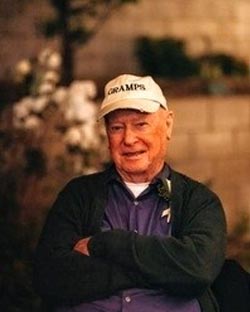 August 3, 1932 – Dec. 1, 2021 Age 89, of Alta Loma, CA, passed away on Dec 1. The Lord graciously bringing him into reunion with his wife, Nancy, who passed in 1999. Terry was a devout Catholic and member of the St. Peter and St. Paul community for over 50 years. He has 5 children, Kurt, Mike (Shelly), Maureen, Keith (Cheryl), and Joseph, 16 grandchildren, and 9 great grandchildren. Terry’s roots are from Cleveland, Ohio in which he was very proud of. Terry graduated from Cal Poly Pomona. Worked at General Dynamics in Pomona and Rancho Cucamonga until his retirement in 1988. Terry has a second home in San Felipe, Baja Ca. which he cherished and was his happy place. His children, grandchildren, and extended family all enjoyed their trips to Baja with him. Known to all family as "Gramps". Was one of the most knowledgeable man in all aspects of life. Could mechanically and electronically fix anything. He loved a good Merlot and loved telling stories of his life especially his family history. He served in the Korean war in the Navy on the USS Devastator AM 318 Mine Sweeper. Terry had two brothers, Jack and Jim, and a sister Helen. Terry loved watching sporting events especially boxing. He enjoyed fishing and camping. But most of all Gramps was always there for all family events and milestones.