Written by Night For Vets on April 17, 2019. Posted in Gone But Not Forgotten 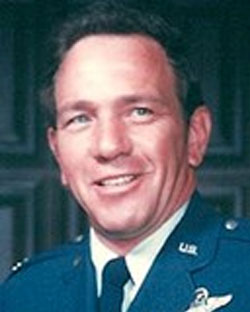 Ted H. Shadburn, 88, passed away on March 25, 2019 of natural causes at St. Jude Medical Center, Fullerton. Born to Eston and Rose Shadburn and raised with his brother, Dale, and sisters, Gretchen, Ginger and Sybil, in northeast Ohio, Ted attended Cathedral Latin High School and John Carroll University prior to receiving a congressional appointment to the United States Naval Academy (Class of 1953).

Soon after graduation he married his sweetheart, Barbara Condon, on July 11, 1953 in Painesville, OH. Upon receiving his commission in the USAF, Ted embarked on a distinguished military career spanning 26 years. He served with the 38th Bomb Wing at Laon Air Base, France where he flew the B-26 and B-57 Tactical Bombers (1954-1957). Ted pursued and obtained his graduate Engineering degree from the Air Force Institute of Technology at Wright-Patterson AFB in Dayton, OH (1959). While in the Air Force, he was qualified in nine different aircraft and served as both an Instrument and Flight Examiner while performing engineering and staff assignments. His service included stops at Yokota AFB, Japan, where he flew C-130’s, Hawaii’s Hickam AFB, Saigon, the Pentagon and McClellan AFB, Sacramento. His final post was at Norton AFB in San Bernardino as Commander of the Special Logistics Squadron where he was tasked with directing the entire logistics support team for the SR-71 spy plane. The highlight of his military career was the opportunity to fly the SR-71 at greater than 3 times the speed of sound. Ted’s major military decorations include the Legion of Merit, the Bronze Star, the Meritorious Service Medal, and the Air Medal with two Oak Leaf Clusters. Upon his military retirement in 1979, Ted joined the Lockheed Aircraft Corporation in Burbank where he served as a Group Engineer, Configuration Manager and Division Manager on the F-117 stealth fighter program in The Advanced Development Projects (1980-1991).

After his tenure with Lockheed, Ted truly enjoyed retirement. There were many road trips across the country with Barbara by his side and 2 sets of golf clubs in the trunk. Between tee times, family and friends enjoyed sharing stories old and new during their visits. Once the odometer hit too many zeros, Ted and Barb made frequent trips to their Palm Springs retreat for golf, food and friendship. Ted was not a man to sit still. He built model airplanes, became a master at photography (all his kids remember their special time in the darkroom watching images come to life), watch repair, gardening and workouts at the gym. A man committed to his Catholic faith, he was an active member of Redland’s Holy Name of Jesus Parish as a benefactor and lector. With a regular group of fellow parishioners, Ted and Barbara attended mid-week mass followed by breakfast filled with fellowship. In recent years, Friday golf with buddies, topped off with a burger and a beer, was a cherished routine.

Ted leaves an enduring legacy in his family. The Redlands home hosted many a celebratory gathering with family from both near and far. His joy radiated at these events and give us all memories to sustain us in his absence. Ted is survived by his wife, Barbara; children: Jeffrey (Sharon), Mark (Lea), Craig (Margaret), Kathleen (Patrick) Butler and Shawn (Kristen); eight grandchildren: Sandy, Christina, Angela, Kristen, Meghan, Sarah, Claudia and Matthew, and 3 great-grandchildren: Alex, Eli, and Vivienne.