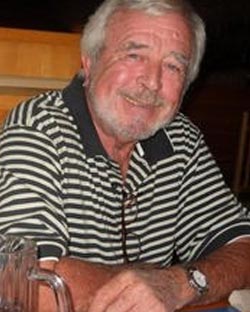 11/14/1938 – 11/03/2021 Tom was born November 14, 1938 in Los Angeles, California, the second of four children, to Doris May Haines and Harry Thomas Carpenter. Tom was a resident of the Riverside area for more than 80 years. He lived initially in the original Canyon Crest housing for government workers; and then he grew up in the Sunnyslope area of Rubidoux. His schools included Lincoln Elementary, West Riverside Elementary, Central Junior High, Jurupa Junior High and Riverside Poly High School, and was class of 1956. Tom served in the U.S. Army from 1961 to 1967. He was initially stationed at Fort Bliss, Texas, then assigned to a Hawk Missile Base in South Korea as a crewman driving a missile loader. Tom’s unit was 7th Calvary Regiment, 1st Calvary Division, 7th Missile Battalion, 5th Artillery, D Battery. Following active duty, he served in the Army Reserves and was honorably discharged, as a SPC4, in 1967. Tom married Mary Bilicke on March 14, 1964, in the St. Francis Chapel at the Mission Inn, Riverside. They have two children, Diana Tennant and Teresa Carpenter. As an employee of Riverside County Flood Control and Conservation District, Tom retired in 1996 after nearly 38 years of employment. During his time there, he served as an engineering aide and instrument man in survey and a construction inspector retiring as a principal. Tom was an avid golfer, formerly a longtime member of Jurupa Hills Men’s Club and current member at General Old Golf Course. Years ago, Tom played softball and enjoyed bowling. He also enjoyed coaching youth sports and doing volunteer work. Tom coached Junior Tackle Football in the 1970’s and Colt League Baseball in the 1980’s. He was a member of Golfers for Kids charity. Tom had a life long love of motosports, motorcycles, dune buggies, Baja bugs, and speedboats. He had a great time running boats on the Parker Strip and buggies at Glamis and the sand drags. He had belonged to Pomona Valley Boat & Ski Club, National Drag Boat Association, American Sand Racing Association and the Riverside Raceway Booster Club. Tom was an off road racing checkpoint captain for many years for SCORE and High Desert Racing Association. With his wife Mary, he enjoyed travels to the Bahamas, Mexico, Canada, Alaska, Hawaii, and many other U.S. points. Survivors include his wife Mary, daughters Diana (Doug) Tennant and Teresa Carpenter, grandchildren Naomi Wagnon, Ryan Wagnon, Alyssa Tennant, and Jacob Tennant, brothers Jerry (Joyce) Carpenter and Larry "Joe" (Carole) Carpenter and numerous nieces and nephews. Tom is predeceased by his parents and his sister Sandra Crawford.