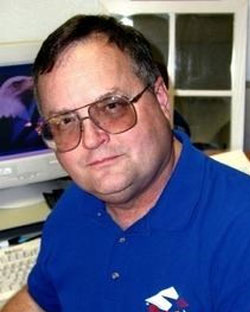 Thomas (Tom) Gunn June 15, 1951 – March 29, 2022 Thomas “Tom” Arthur Gunn was born in Upland, CA and passed away March 29, 2022 at his home in Wildomar, CA. He enlisted in the Air Force in 1971; while in the military, he traveled extensively throughout Europe and the Middle East. Having received a Bachelor’s Degree in Photography from Arizona State University in 1978, he enjoyed spending every college football season cheering on his beloved Sun Devils. He was honorably discharged from the Air Force in 1983 as a first lieutenant. In 1991, while raising his two children, Michele and David, he met the love of his life and best friend, Frances. The couple merged their families in 1996 and recently celebrated their 25-year anniversary surrounded by family and friends. Tom was a colorful character whose favorite past times included watching classic television, socializing with his friends, and playing with his dogs. He was known for striking up a conversation with anyone, making strangers smile and many an acquaintance feel like an old friend. During his 20 years with the County of Riverside DPSS as an Employment Services Counselor, Tom made many life-long friends while significantly impacting the lives of hundreds of job-seekers and their families. Tom and Frances treasured time with their large family, including their five children Michele, David, Rozanne, Angela, and Michael, and doted upon their ten grandchildren Chris, Tim, Nathaniel, Emily, Jay, Micaela, Michael, Charli, Danny, and Opal. Tom is also survived by his sister, Nancy, and brother, Paul. He will be greatly missed by all who knew him.