Written by Night For Vets on August 23, 2018. Posted in Gone But Not Forgotten 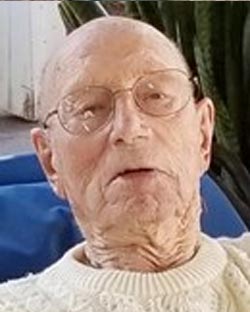 Fred passed away on July 14, 2018 in Riverside, CA just days after celebrating his 94th birthday. Fred was born in Council Bluffs, Iowa in 1924 and came to California in 1942 to serve in the Marines during World War II. As a young Marine he was stationed in San Diego where he met and married the love of his life, Peggy. They were married in 1945. Later he moved his family to Riverside and joined the Air Force. Fred served around the world in such places as Japan, Guam and Thailand. He retired from the Air Force after 26 years at the rank of master sergeant. After retirement he went back to work as a bailiff for the Superior Court in Riverside. His family always came first and was the center of his life. He never tired of having all the kids, and grandkids around and loved their visits. Fred is survived by his wife of 72 years Peggy Kensinger, their three children: Martha Lehman, Keith Kensinger, Amanda Bragdon, four grandsons, and six great grandchildren.