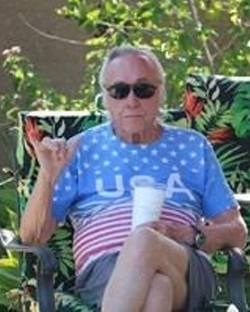 Thomas R. Strong, 91 years old, of Fontana, CA, passed away on January 29, 2022, in Ontario, CA. He was born to Thomas and Erna Strong on May 12, 1930, in Los Angeles, CA. Thomas loved his country and proudly served in the United States Air Force for 20 years. He was a Vietnam Veteran and was awarded the Bronze Star during his service. Thomas would then move on to become a manager at Fleetwood Industries where various recreational travel trailers were built. During his retired years, Tom enjoyed building model airplanes of the United States military, attending air shows, following the travels of the few steam engine locomotive trains still running throughout the United States, enjoying time with his grandchildren, and reading endless books. Thomas (Tom) was married to his beloved wife, Ann, for 60 years before her passing in January 2013. They raised their family in Fontana since the mid-1950s in the house the family still owns today. Thomas is survived by his younger brother Phil of Colorado, his 2 sons Garret of Fontana and Brent of Victorville, 4 grandchildren, Lindsay of Fresno, Jarrett Thomas of Victorville, Katie of Pittsburgh, Courtney of Carlsbad, and 2 great grandsons, Carter, and Deklan Lee Thomas.