Written by Night For Vets on December 10, 2019. Posted in Gone But Not Forgotten 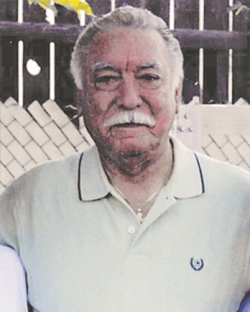 TRINIDAD P. CALDERILLA Age 94, passed away peacefully on Saturday, November 23, 2019 in Grand Terrace, CA. He was born to Daniel and Socorro Calderilla on June 12, 1925. Trinidad faithfully served in the United States Army during World War II and earned an honorable discharge as a combat veteran.

He was a Graduate of Colton High School and San Bernardino Valley College. Trinidad was married to Celia N. Calderilla until her passing in 1976. Trinidad worked for the Santa Fe Railroad and retired from the San Bernardino City Unified School District.

He enjoyed spending time with his grandchildren and taught them many life lessons including how to fish. In his final days he enjoyed watching the Los Angeles Dodgers play baseball.