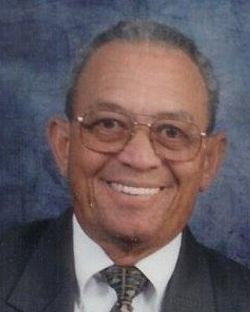 September 20, 1942 – January 12, 2022 Valcouer (Val) Caesar was born on September 20, 1942, in Oberlin, Louisiana. He was the eldest of four sons, Alfred, Alfin, and Melvin Caesar, respectively. Val joined the United States Air Force and achieved the rank of Master Sergeant after serving for over 20 years. Val served in the Vietnam War, alongside two of his brothers. His military career brought him to Southern California’s Norton Air Force Base, where he met Faye. They were married January 7, 1978. They blended their families with the six children between them. Val reached the position of Detective for the San Bernardino Police Department (and served on President Ronald Reagan’s Secret Service detail) but had to leave his post with a disability after being shot. This began his career in education. Val joined the Central Middle School staff working with disciplined students in on campus detention and suspension in a place affectionately known as "Caesar’s Palace." Val graduated with academic honors from California State University, San Bernardino with a bachelor’s degree in Criminal Justice. He left Central Middle School in 1985 (but not after he made positive impacts on hundreds of students’ lives) and began working for Riverside Unified School District (RUSD) as the Transportation Director. Val was responsible for ensuring the safe transportation of thousands of K-12 students during the school week, and on weekends for extracurricular activities. Val had real experience with student extracurricular activities as the 1988-1989 Booster Club President for John W. North’s world-famous Blue Star Regiment. Val was also an avid sports fan of the Huskies football and basketball teams. Val was also a member of Riverside Parking, Traffic, and Streets Commission from 1995-2004. He earned his pilot’s license at Riverside Municipal Airport, and continued his legacy of service, by serving in The Civil Air Patrol. Val was a well-loved Usher at Riverside’s St. Catherine’s Catholic Church. He is also a lifetime member of The Knights of Columbus. After retiring from RUSD, Val and Faye moved to Lake Charles, Louisiana, in 2004. Val continued to serve and worked in the Louisiana Civil Air Patrol. He also was an Usher at St. Martin de Porres Catholic Church in Lake Charles. Val and Faye moved back to the West Coast in 2011 and settled in North Las Vegas. Val continued to enjoy his retirement by fishing, golfing, attending USC football games, and cruising the world with his family and friends. He visited over 20 countries, including Cuba, Germany, France, the Philippines, Korea and Panama. Val passed away from Alzheimer’s on January 12, 2022, in North Las Vegas, NV.