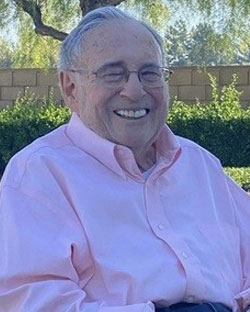 Victor Fenster passed away on July 25, 2020 at the age of 94. He was born in Brooklyn, New York and was the youngest of six children. Victor enlisted in the U.S. Army in April, 1944. He was awarded the Bronze Star Medal for bravery during a battle in Germany on April 8, 1945. He received an honorable discharge in May, 1946 after attaining the rank of Private First Class. In 1957, he moved to California with his family where he opened up his own C.P.A. practice in San Bernardino. In later years, both of his sons, Gary and Jon, joined the family firm of Fenster and Fenster CPAs. The firm continues to this day. Victor is survived by his three children: Jean Korngold, Gary Fenster, Jon Fenster and his 5 grandchildren: Jacob, Taylor, April, Hogan and John. Victor will be forever remembered for his fabulous sense of humor and kind-heartedness.