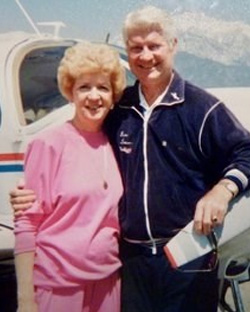 Gene made his final approach into HVN on September 24, 2020, landed, and found his wife, Faith, waiting for him. Born in Hammond, Indiana, he and Faith lived in Rialto, CA for 63 years, where they raised two children. He left his parental home as a teen, and supported himself as he pursued his educational goals. He graduated from San Bernardino High School, the University of CA, Santa Barbara, and achieved a Master of Arts from Redlands University in U.S. history. He taught that subject, U.S. government, and driver’s training for forty years at Fontana High School. He also coached the boys tennis team, was advisor to the Leo Club, and assisted several senior students with their applications to U.S. military academies. He was well-known for waving to students in the morning while driving his trademark white, Porsche 912 into the school lot. In addition to working on his classic cars, Gene was an avid tennis player, playing for the men’s team at San Bernardino Valley College, and winning many trophies while competing in local community tennis tournaments. He liked to say that he was able to succeed with “normal sized” racquets, although he also enjoyed using the larger ones as they became popular. He was also a self-taught mechanic, plumber, electrician and carpenter and was often asked by neighbors to help them fix various household problems. He liked to work with his hands, and created many beautiful accent pieces for the home, including mosaic tile tables, jewel-like bunches of grapes made of resin, wind chimes, and a wooden model submarine for the backyard pool that was self-propelled and dove under the water. Proudly serving in the U.S. Army and deployed overseas to Korea, Gene believed that hard work, education, and service were the keys to success in America. He often wore caps that had emblems of the Army, Air Force and Civil Air Patrol. He was very happy to hear in his last weeks of life, that in addition to his children graduating college, his two granddaughters would both receive their bachelor degrees in 2020. Gene’s most enduring passion began in the early 1970’s when he became a private pilot. He purchased a share in a Piper Archer aircraft (tail number N2134E) with his best friend, Larry Rice, and together they flew countless hours over the scenic San Bernardino mountains and valley. He loved taking family and friends for rides and letting them take the wheel under his watchful eye. He received a commendation from the City of Rialto for serving on the municipal airport commission for many years. In that capacity, he was the voice of many pilots who flew out of Miro Field in north Rialto. In the early 1980’s, he joined the Civil Air Patrol, (a civilian auxiliary of the U.S. Air Force), Squadron 25, at Cable Airport, Upland, CA. This brought together his love of aeronautics, military culture and service. He became very involved in their cadet program, instructing young people in the basics of flight and encouraging their interest with many plane rides. He was awarded several commendations over his time with the unit for his dedicated service. Gene also volunteered with the Redlands Police Department when they requested aerial support for ground searches. Again combining his love of flight and desire to serve, in later years, he became involved with the Marine Toys for Tots campaign, with the Redlands Airport Association. Gene would drive to pick up donated toys then “Stuff a Plane” with them and fly out with other plane owners to the Marine base in Twentynine Palms, CA. Hundreds of underpriviliged kids were benefited every year by this generosity. Gene is survived by his ground-crew on Earth: daughter, Nancy (Joe) Megan, son, Gary Jozens, granddaughters Tara and Kelly, nieces and nephews and many friends.