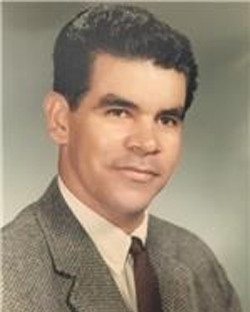 July 19, 1928 – October 23, 2021 Vincent Rudolph Maga¤a, aged 93, a longtime resident of Yucaipa, California, after a brief illness, passed away peacefully at his home surrounded by family, on October 23, 2021. Vincent was born on July 19, 1928 in Perris, California to Josephine Del Rio and Vicente Maga¤a. The son and grandson of immigrants from Michoac n, Mexico, he spent his early years helping his grandfather Bartolo Del Rio and his Uncle Pete Del Rio, who owned a fertilizer business and raised sheep. He entered grammar school in 1934 and high school in 1942. He excelled in a range of sports including on the varsity football team and the track team. His sophomore year, he and several classmates organized a dance combo, named the Perris Swingers, where he played trumpet. The group played for all the school dances and in the greater valley as well. During the summers he worked harvesting grain and bagging potatoes on nearby ranches. He graduated from Perris High School in 1946, and that same year joined the Army. He was sent to Gwangju, South Korea as part of the 20th infantry during peacetime. Subsequently he was transferred to the 6th Division Dance Band playing trumpet five nights a week in Busan and touring South Korea. After leaving the Army in 1948, he attended Chaffey College. He went on to attend the University of California at Santa Barbara where he graduated in 1954 with a degree in Music Education. He took a hiatus from school and worked from 1954 to 1956 hauling lumber and driving Caterpillar tractors in the San Bernardino Mountains. He then earned a degree in Spanish and a secondary teaching credential at San Diego State in 1957. He received a full scholarship to Stanford University, where he earned a Master’s Degree in Spanish in 1964. He taught Spanish at Yucaipa High School for close to 30 years. He loved to camp and fish. Every summer he took his family across the country to many iconic national forests and parks. He played trumpet in several Yucaipa big bands until the early 1990s, and performed all over the Inland Empire. He also loved languages, and took pleasure in knowing the origins of words. He read constantly, with a focus on both World Wars and Korea and also enjoyed reading Louis L’Amour western novels. After retiring from teaching, Vincent was an active member of the Perris Valley Historical Society. He had an uncanny memory for the history of people and events, and contributed a great deal of information about the whole region. Well into his 70’s, Vincent traveled all over California with his long-time companion Dorothy Anderson, also of Perris, California. Until the end of his life, nearly every day he drove a small tractor on the acre of land he lived on in Yucaipa. His greatest pleasure was talking with his friends on the phone, and visiting with his family. Vincent loved nature, peace and quiet, was relentlessly optimistic, loving, and encouraging of others. He was preceded in death by Dorothy Anderson, his mother Josephine, and his sister Eleduvina. He is survived by his children, and sons and daughters-in-law: Vincent and Julie Maga¤a, Sari and Terry Shimamoto, Aizita Maga¤a and Francisco Henson, his grandchildren Christy, Jeremy and Marissa Shimamoto, and Julia and Mateo Maga¤a. He took tremendous satisfaction in the personal qualities, achievements and education of his children and grandchildren all of whom, will hold him forever in their hearts.