Written by Night For Vets on November 5, 2019. Posted in Gone But Not Forgotten 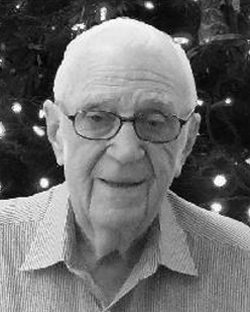 Walter John Dunderman was born in Brooklyn, New York on October 10, 1931, and passed away on October 27, 2019 in Upland, California. He was the oldest of four children of Walter H. Dunderman and Margaret E. Dunderman and was preceded in death by his brothers John and Robert, his parents, and is survived by his sister Cathi Stalter of Stamford, Connecticut. Walter graduated from St. Augustine High School in Brooklyn. During this time he enjoyed attending Dodger games.

Walter served in the U.S. Air Force during the Korean conflict. He was primarily stationed at Castle AFB in Atwater, CA. It was there that he met and married Josephine Araujo. They relocated to her hometown of El Paso, Texas.

Walter graduated from Texas Western (now UTEP) with a Master’s Degree in Education. He was an educator, and vice principal in the El Paso School system. During this time, Walter and Josephine became the proud parents of four children: Carmela, Richard, Patty, and Daniel. The family then moved to Norco, California in 1967, where Walter taught school for the Corona Norco School District for 24 years, first at Eastvale Elementary, then at George Washington Elementary in Corona. During these years he was very interested in computers, and along with some coworkers, he applied for a copyright on computer grading cards. After his divorce, Walter moved to San Bernardino County. He is survived by his previous wife, Josephine.

Walter retired in 1990 and enjoyed numerous activities in his retirement. He met Mija McGurk during this time through their shared Catholic faith, and enjoyed traveling with her. He tutored children in math and cursive handwriting, helped with bookkeeping on the computer for his Catholic parish church, and enjoyed helping others with their genealogical searches at the Family History Center in Upland. Walter made many new friends while assisting them with their ancestry searches. He also volunteered with his homeowners association and a park in the complex was subsequently named "Dunderman Park" in acknowledgement for his work.

Another interest was making greeting cards on the computer to keep in touch with his nieces and nephews on the East Coast about their families, along with his friends, and distant relatives, and Walter sent cards for all holidays and birthdays. Walter passed away at the age of 88.