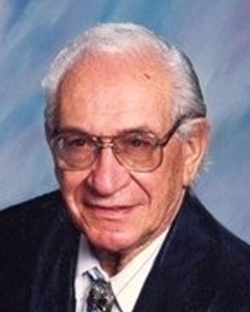 Born in Weed, California in 1922, William “Bill” Alves spent his formative years between Yreka, California and Ashland, Oregon. World War ll found him in the U.S. Navy’s V-12 deck officers’ program. In the early part of the war, during officer training at Idaho State University, he was able to develop his baritone voice. After the war, thanks to the G.I. Bill, he earned his Bachelor of Science degree from Southern Oregon University and his Master of Science in Education at USC.
In 1953, while still teaching, and serving as a second-term president of the Teachers Association in Oxnard, California, he met and married Aileen Smaker, another teacher.

Bill went on to serve as both an educator and a school administrator in five different school districts throughout California. In 1963, with his family, he arrived in Hesperia as a teaching administrator. Summertimes in the early 1960’s he also ran the Hesperia Recreation and Park District. Former students fondly remember his time as a vice-principal at Juniper School and later as principal at Joshua Circle School.

In 1964 and 1965 Bill performed with the High Desert Theatre Arts and Music Guild. In 1965-1967 Bill was president of the Victor Valley Community Concert Association. In 1967 he created “Songs ‘n Sketches,” regaling many an audience with his singing, while his wife chalked a full-sized picture illustrating the lyrics.

In the early 1960’s Bill served as the president of the Lion’s Club. 1968 and 1970-71 found him as president of the Kiwanis Club of Hesperia. He faithfully dedicated many years serving in Kiwanis and investing in his community. In honor of his years of dedicated service, he was awarded the prestigious Kiwanis Dunlap award in 2006 and was awarded as the 2015’s Kiwanian Rock of the Year.

In 1973, fifteen years before Hesperia’s official cityhood, he was elected Honorary Mayor of Hesperia. He soon became a Charter Member of the Hesperia Elks Lodge #2646. Bill was an Elks Lodge Trustee from 1992-1997, and served for many years as the Elks Scholarship Chairman.
Having retired from education after 33 years, he earned his real estate commission in 1977. He joined the staff of Blunt Realty and immediately became an active member of the then Victor Valley Association of REALTORS®. Next, he became a VVAR Director. By 1985 he had earned his broker’s commission and had opened Bill’s All-Star Realty. In 1982 Bill was named REALTOR® of the Year. In 2000 he earned the REALTOR® Award of Esteem.

Bill was handy with carpentry tools. Even with his busy schedule, Bill still found time to build: a seventeen-foot run-about boat – “The Great Pelican,” a nine-foot slide-in camper that slept five – “The Star of the West,” wooden privacy fences, an enclosed sun porch, and a detached double garage. He also did maintenance and repairs on his rental houses.

He was an outdoorsman and always stressed the importance of water-safety. He earned his Water Safety Instructor certificate in the 1960’s.

He enjoyed tending to his brood of “All-Star Chickens,” and provided lots of eggs for others, as well as providing a home for various other animals including dogs, cats, tortoises and even a crow.

One of his favorite quotes was from Benjamin Franklin, “An investment in knowledge pays the best interest.”