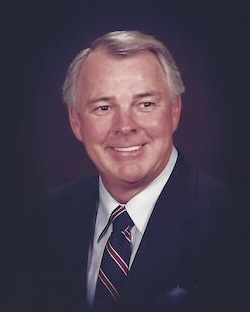 Rancho Mirage – William George Barringer “Bill” (as he liked to be called) passed away on August 31, 2020. He was born in Wichita Falls, Texas on April 28, 1937 to Velma Marie, and George Barringer. Bill graduated in 1955 from Arsenal Tech High School, and in 1959 from Indiana University (IU) with a BS degree in Business. After college he joined the Army where he was commissioned as First Lt. Officer, he served for two years and received an Honorable Discharge.

In 1966, after his service in the Army, Bill moved to Los Angeles, California and in 1971 met Louise Dobbs Barringer. They were friends for a number of years, pursuing their careers, and after a long courtship, Bill and the love of his life were married on June 29, 1995. At that time, they lived in Culver City, California.

Bill’s interest was in basketball, working out at the gym daily with weights, jogging and participating in week-end marathons, he also had a long time golfing career. Bill, was a long time member of the Mountain Gate Country Club in Los Angeles. He golfed in many tournaments throughout California. Moreover, this inspired him to pursue moving to the desert. He and his wife Louise moved to Rancho Mirage, California in 1995, and became members of Mission Hills Country Club, in Rancho Mirage for a number of years.

Moreover, Bill had a desire, and was inspired to own and to drive an Indy race car motivated by his father’s memory and spirit! He met with race car enthusiasts, and drivers, gathered information, and later purchased, a vintage 1938 Ford Indy Champ race car.

Bill then through proper channels, contacts and mechanics re-built, reconfigured, and designed a replica of his father’s race car; the car was built to his (Bill’s) specs, dimensions and size, he tweaked it, and named it after his father’s race car the “George Barringer SPL #26”.

He raced his 1938 car with some of America’s Greats in the Indy 500 Vintage Race Car arena, at California Speedway, and other well known race tracks in California.

Bill was a born again Christian, he loved the Lord God. He shared his knowledge of the Word, and openly practiced his Faith and Wisdom. He was a parishioner at the St. George Greek Orthodox Church, of Palm Desert, California. He was also a Shriner, and a brother in the Order of Masonic Lodge for over 50 years.

His motto: If I can help somebody along the way then my living shall not be in vain.

Bill is survived by his loving wife Louise Dobbs Barringer, his God-son Istvan Banki who referred to him as Grandpa Bill and loved him as if he was his very own (Istvan’s mother, Nelly Zambrano Banki and father Steve Banki): Fraternity Brothers Kappa Delta Rho; Melvin Erman (wife Linda), and Dr. C. David Hay (wife Joy); and a host of other loving friends and neighbors.