Written by Night For Vets on January 6, 2021. Posted in Gone But Not Forgotten 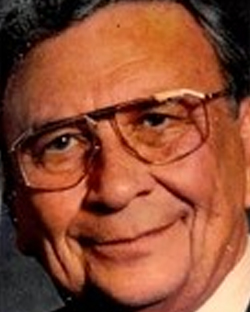 William H. (Bill) Clinton, 96, the first Register of Voters for San Bernardino County, died at his home in San Bernardino on January 1, 2021. Bill was born in Redlands on April 19.1924 and attended Redlands schools graduating from RHS in 1942. Because of WWII he immediately went into the military service in the Army Air Corp as a B-17 Aircraft crew member and was stationed in England. He flew 27 successful missions over Germany with only one forced landing in unoccupied France. According to Bill’s stories the crew was treated extremely well by the French while their B-17 airplane was being repaired. Bill began his S.B. County career in 1949 in the County Clerk’s office in the election section. When the Registrars Department was formed he was selected as the head of the department. After 37 years of service he retired. In his capacity as Registrar he met and knew many politicians on a first name basis. Many times he was asked if he was related to President Clinton. With a smile his answer was an emphatic NO. However he did correspond with him when he was Governor of Arkansas. Bill is predeceased by his parents, two brothers, Alfred and Kenneth, and his sister Pearl (Penny) Spencer. He is survived by his brother Robert (Bob), his wife of 70 years, Mary Jane; daughters, Nancy (Bruce) Alarid, and Tracy (Richard) Slaughter, and five grandchildren, Jason and Timothy Alarid, Derek and David Zarbok, and Carolyn Moon. He was also very close to his 11 great-grandchildren.