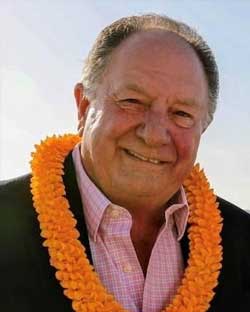 William Hayes Gill (“Buzz”) passed away on July 17, 2020. Buzz was born in Wilkes-Barre, Pennsylvania on June 21,1944. Buzz and his family moved to California in 1954. He attended St. Paul High School (Santa Fe Springs, CA) where he was an All-Angelus League quarterback for the football team, and was inducted into the St. Paul High School Hall of Fame in 2013. He attended the University of Idaho on a football scholarship and later attended and graduated from Whittier College. Following college, Buzz served in the United States Army for three years. Buzz began his long and successful career as a PGA Golf Professional in Oklahoma City, OK in 1970. His long career was mostly with Landmark Golf, beginning in Oklahoma and eventually in the Coachella Valley starting in 1987. Buzz dedicated many years as a volunteer coach for the Palm Desert High School basketball team where he was a great mentor for many young men. Buzz was a devoted Catholic and recently became a practicing minister. He conducted many weddings and funeral services for friends and loved ones. He also provided worship services for several retirement homes in the valley. Buzz lived life to the fullest and would always light up the room with his laughter and kindness. Buzz loved nothing more than spending time with his family, the Fighting Irish, Boston Celtics, and a great steak topped off with a martini. Buzz is preceded in death by his parents, William H. Gill and Mary O’Malia Gill, and his sister Christine Gill Lotts. Buzz was survived by his beautiful wife of 52 years, Yvonne Gill (Jimenez), and his four children and their families: Nikki Gatch (husband Don, and children Jamie & Andrew, and granddogs Blue & Sparky); Amy Clause (husband Scott & son Jake, and granddogs Belle & Lulu); Amanda Errecart ( husband Keith and children Maya, Malia & Koa, and granddogs Bacon & Kona); son Joe Gill (fiancé Buffy Montez Paveloff and children Victoria, Jacob, & Olivia, and granddog Fozzy).