Written by Night For Vets on September 5, 2019. Posted in Gone But Not Forgotten 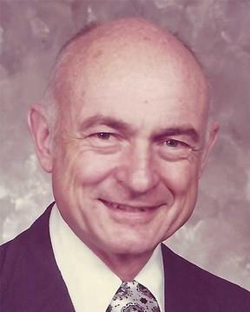 "At the name of Jesus, every knee shall bow and every tongue confess that Jesus Christ is Lord of all." Phil. 2:10-11

Born in Atlanta, GA, he was the son of the late Worrell H. and Irene E. (Tucker) Holby. Raised and educated in New Rochelle, NY, he attend U.S. Merchant Marine Academy at Kings Point in New York and received a Bachelor’s Degree and a Master’s Degree from Westminster Choir College in Princeton, NJ. He earned the advanced degree in organ proficiency from the American Guild of Organists. Bill served his country honorably in the United States Navy, serving in the Pacific Theatre during World War II. At the age of 21, he saved the lives of men on his ship when it sunk. With his family, he lived in Canton, OH for 35 years. Bill moved to Palm Desert, CA where he lived for 14 years before moving to Bradford in 2014. He was a church organist and choir director in Kentucky, Michigan and Ohio, retiring at the age of 85. He became a school teacher and also worked for many years in the home insulation business. H was well known for his handyman skills. Bill was a charitable man, volunteering for Habitat for Humanity. He gave many pints of blood to the Red Cross and at the end of his life donated his body to science.