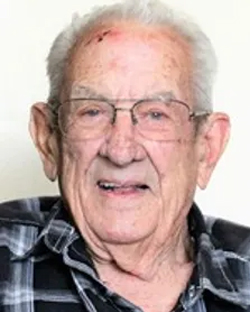 William Edward Martin, 92, passed away Thursday, October 20th, 2022 at 9:30 pm. William was born on June 2nd, 1930 in San Bernardino, California and graduated from Redlands High School in 1948. After high school he joined the Army until he was honorably discharged in 1950 due to hearing loss. William moved to Apple Valley, California in 1964 where he worked for Southern California Edison until he retired in 1985. William was preceded in death by his son Dennis Edward Martin and his wife Bonnie Lee Martin. He is survived by his children: David Martin of Apple Valley, California, Linda Martin of Victorville, California, and Robin Larsson of Arnold, Missouri, two grandchildren, and six great-grandchildren.