Written by Night For Vets on March 5, 2021. Posted in Gone But Not Forgotten 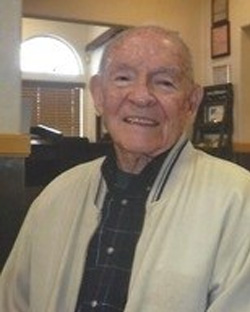 William Charles Moffat (Bill), beloved Husband, Father, Grandfather, Great-grandfather and Friend, passed away surrounded by his family at his home in Hesperia on February 17, 2021 at the age of 90. Bill was born on February 11, 1931 to William A. and Margaret Rauscher Moffat in Monessen, PA. He joined the Air Force in 1951 during the Korean conflict and was stationed at George Air Force Base in Victorville, California. He worked in the Jet Aircraft/Engine Field and was sent on TDY to many places in the United States as well as a tour in Iceland. In 1953, he met the love of his life, Lorraine Cottrell, who was working at George AFB. They were married on February 13, 1954 in Las Vegas, NV and just celebrated 67 wonderful years of marriage. In 1955, Bill was honorably discharged as a S/Sgt. and began his career in Civil Service at George AFB. He continued in the Jet Engine Field and later became Shop Foreman of Non Destructive Inspection. He was President of the George AFB Federal Manager’s Association for several years. In 1990 Bill retired after 35 years in Civil Service. He and Lorraine became ‘world travelers’ and enjoyed visiting many different countries. A special trip was to Shotts, Scotland, the Moffat’s ancestral home. They enjoyed cruising and attended many Elderhostels from Coast to Coast. Bill enjoyed many interests in his life – among his favorites were trips taken with his family – vacationing in their trailer, hiking, fishing and spending many fun days in Mexico. He had a soft spot for his Boxer dogs and considered them part of the family. Bill was on many bowling leagues in Victorville and was an avid sports fan. Baseball, Basketball, Football, he loved them all. His main passion was The Sport of Kings – the horse races. He was a fan since the mid-1960’s and him and Lorraine attended racetracks around the US and abroad. Bill coached and managed his son Jeff s Little League teams in Hesperia from 1968-1973. In 1973, their team, the Tigers, won the Senior Championship and went to the District Play-offs. Bill was a member of many organizations including the Victorville Masonic Lodge No. 634, F. & A. M., the Mohahve Historical Society, the Moffat Clan Society and the Los Californianos. He was a member of The Community Church at Jess Ranch. Bill never met a stranger and valued the many friends he had, both near and far. With his easy smile and warm nature he was always ready for a conversation. His zest for life was contagious.
He was preceded in death by his parents, William and Margaret Moffat and sister, Marilyn Moffat Duvall.
He is survived by his wife, Lorraine Moffat, children, Jeffery S. (Julie) Moffat of Apple Valley, CA, and Janet (John) Walker of Colorado Springs, CO, five grandsons, Elliott (Corrina) Moffat, Charles Moffat, Myles (Monica) Moffat, all of CA, Jacob Walker of Lakewood, CO and Jared Walker of Colorado Springs, CO, great-grandsons, Cameron S. Moffat, Nathan Chacon and great-granddaughter Natalie Chacon, Apple Valley, CA, along with many beloved nieces and nephews.