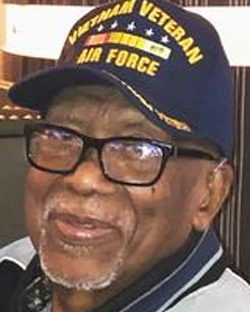 Age 89, of Colton, CA, passed away peacefully on January 19, 2022 in Redlands, CA. He is survived by his daughter, Jennifer Piggott-Thuyns, son-in-law, Al Thuyns, niece Patricia Piggott, nephews Julius (Tony) Joseph, George Joseph Jr., Patrick Piggott, along with their spouses and children. He was preceded in death by his parents, William H. Piggott Sr., Millicent Piggott, brother Norman Ivan Piggott, and sister Jeanne Anne Joseph. Born in Brooklyn, New York on September 28, 1932, he became a lifelong Dodgers fan and even met Jackie Robinson. He was raised in Barbados but came to the United States because he was causing too much trouble (as told by Aunt Jeanne). He valiantly served in the Air Force where he was part of the Korean and Vietnam wars and traveled the world being stationed in Guam, Spain, Japan, Thailand, Puerto Rico, Philippines, and England. In England, he met and married Jennifer Layne (who is also from Barbados) on December 29, 1973. They started their family and moved to California. He retired with the rank of Technical Sergeant on December 31, 1976 from March Air Force Base in Moreno Valley, CA. Next, he worked at the VA Hospital, first in Long Beach then in Loma Linda, where he was one of the hospital’s original employees. In addition to making everyone laugh regularly, he received countless performance awards while working as a GI tech in the Gastroenterology department. He retired in 2007 but continued to volunteer his time until 2019 where, for many years, he dedicated at least 5,000 hours a year in service of his fellow veterans. William was a long-time parishioner of St. Michael’s Episcopal Church in Riverside where he assisted with Sunday services and trained young children to be acolytes of the church. His love for playing cricket was unmatched. He loved coaching and refereeing AYSO soccer games, and bowling in many leagues at Tava Lanes and the Concourse. He also enjoyed playing poker and betting on the race horses in San Bernardino. Finally, William could be counted on to have a good time at parties while dancing and singing to oldies and reggae music.