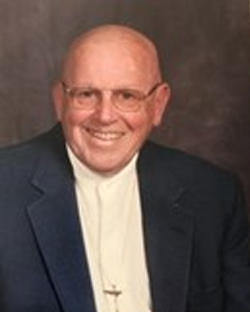 Rev. William Russell Woolsey, also known as Bill, Grandpa Bill, Pastor Bill and Pop, peacefully passed away at his daughter’s home on Sunday, February 23, 2020. He was born May 16, 1927. Bill married Frances Jean Woolsey (Croiser) February 23, 1952. God has reunited the two in heaven on their wedding anniversary. He is survived by his 3 beloved children: Steven Russell Woolsey (wife-Linda), Paul Duane Woolsey (wife-Joyce) and Marva Frances Woolsey (husband-Mike). Bill has 14 grandchildren, 27 great-grandchildren and 1 great-great-grandchild. In addition, Bill had 5 siblings: Geraldine, Della, Pryor and Darlene, all of which have since passed and is survived by his sister Gynath.

William served in the U.S. Military under the U.S. Navy (1943-1947) and U.S. Army Signal Corps (1948-1951). He then worked for General Dynamics beginning in 1951. In between his years working for GD he owned a flower shop and worked as a florist. After roughly 38 years he retired from General Dynamics at age 58. At this point of his life he made a major life change and pursued a life of Ministry. He attended seminary at Claremont School of Theology and went on to become a Pastor at Trinity United Methodist Church in San Bernardino, CA. He completed his work as a Pastor in May of 2015 at the Victorville United Methodist Church in Victorville, CA.

He graciously served as a member of the United Methodist Conference. Bill had a significant impact on others and will be forever known for his incredible generosity, his detailed storytelling and above all, his Christlike love he showed to everyone. Many will aspire to replicate the legacy that he has left behind that was built on faith, character and unconditional love.